All of the Friends of Wilshire Park have been delighted to see the big difference between what the Wilshire Park playground looked like two years ago and what it is today. The improvements made include a new toddler play structure with a slide, a climbing frame that looks like an off-road vehicle, a new playhouse with seating inside, and a rabbit riding toy. These structures replaced the old wooden ones which, over their more than twenty years of honorable service, had been loved to death.

It took a lot of work, but the new items that have gone in kept the bright primary colors of the old equipment and were chosen to blend in with the park’s woodland feel. It’s good, sturdy, American-made equipment that will last at least 30 years, meaning that Wilshire Park will be a safe, happy place for every little child that comes there to play until today’s toddlers have grown-up children of their own.

As our goal of replacing worn-out equipment has been met, it’s time to give the community a report on how we raised the funds and how the money was spent. We have been delighted by the generosity of our neighbors and their commitment to providing all children with safe, fun outdoor spaces, and one way to thank them is to let them know how the money was spent. It’s also our hope that other grassroots groups can learn from what we did so that similar projects can be easier for them to accomplish.

How the Money Was Collected

The Friends didn’t accept cash, except at our fundraiser held at The Wiggle Room last summer. At that event, a few auction items were paid for in cash. Donors were given receipts, and copies of all receipts were delivered along with the cash directly to the Central Northeast Neighbors (CNN) office a few hours after the fundraiser ended. As a rule, we preferred donations to be given by check or donated online to a GoFundMe account. This is because there’s less paperwork for volunteers to do, as well as less nervousness about a volunteer being personally responsible for holding cash, if only for a few hours. The credibility of the Friends depends on being completely above board with any money they collect, so any cash handled was well documented and handed off to CNN as quickly as possible.

The Beaumont-Wilshire Business Association donated $500 to our efforts in order to allow us to spend $499 on the printing of donation envelopes by local company Morel Ink, which gave the Friends a large discount on the price as their way to support our efforts. The envelopes were then distributed in the March-April issue of the Beaumont-Wilshire Neighborhood Association newsletter. These envelopes were designed by Friends volunteers at no cost. 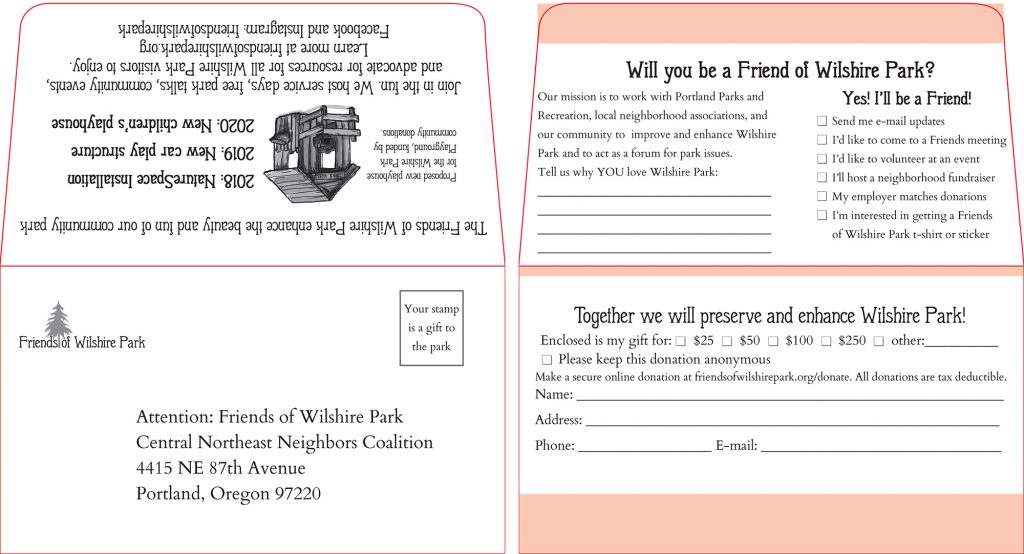 By spending a little money was spent on the envelopes, thousands of dollars came back in donations as the envelopes made it very easy for neighbors to put a check in the mail.

The Friends also held a fundraiser and auction at The Wiggle Room, and one Friends member opened her home on a rainy spring day for an Open House that offered hot homemade soup and bread. These events were not just important for bringing in money. They let the Friends and members of the community meet face-to-face, have some fun together, and remember why we work as hard as we do to improve our local park.

The cost of the car play structure, including manufacture, shipping, and installation, was $15,025. That may seem like a lot for a single playground item, but this is what high-quality, long-lasting equipment costs. Unlike inexpensive back yard equipment which will only see light use for a few years, the pieces that meet Parks Department standards are nearly indestructible and have foundations that reach several feet into the ground. They will last thirty years or more with minimal maintenance. The full amount for the car climbing frame was entirely funded by a single anonymous donor. The donor gave the money was to CNN, who then paid invoices provided by Portland Parks and Recreation.

The playhouse and rabbit rider cost $21,915 and was funded by 76 donors, almost all of whom were residents who live close to the park. The largest donation was $10,000 and the smallest was $10. One local kindergartner contributed the contents of her piggy bank, which contained an impressive $39 in small change.

Overhead costs included $499 in printing costs for donation envelopes. $25.30 was spent on stamps to mail letters from Central Northeast Neighbors to donors confirming their donation and informing them how to claim the donation on their taxes.

A very important thing we’ve learned is the value of building relationships with city employees. Portland Parks and Recreation staff are some of the most hard-working people we’ve met, and they show a lot of creative thinking and commitment to the people of Portland. They have to deal with negative feedback from some citizens, COVID-imposed furloughs, an uncertain budget in the present and future, and a system of hundreds of parks that all have their own needs. Each park in Portland is special to the neighbors who live near it, so we’ve appreciated the time Parks employees have been able to give us. The Friends try to show their appreciation by keeping the park clean, washing away graffiti, and asking Parks staff if there are tasks volunteers can perform. Our commitment to supporting the Parks department staff comes not just from our desire to have a beautiful neighborhood park, but also from our gratitude for the hard work they do.

We were able to work out a plan with Parks staff that allowed us to make improvements to the playground despite the fact that there was no staff time or budget at the city level for these projects. A major overhaul of the playground would have required a full plan and review by Parks staff. Given the current budget and staff constraints, this wasn’t possible. But such an expensive overhaul wasn’t needed anyway; we just needed some new toys for the kids. So instead of going for a needlessly expensive redesign of the playground, we just decided to replace each piece of equipment with something similar. This allowed our efforts to fall under “replacement” rather than “redesign.” The old car structure came out; a new car structure went in. Same with the playhouse. Neighborhood groups can save a lot of time, stress, and money by using this approach. It makes the jobs of Parks staff a lot easier and can take a project from “no-can-do” to “done and done.”

The Friends started out as a scrappy little group of neighbors. Its website, events, and any materials it produces are paid for by Friends members, and all work for the group is done by volunteers. The Friends are now an official committee of the BWNA. This has helped us spread the word about our efforts and get more support from the larger community. The Central Northeast Neighbors made all of our fundraising possible by acting as our fiscal sponsor. The Friends are not a registered charity, and we don’t have a bank account. If we collected money directly, donors would have not have been able to claim the money on their taxes. A member of the Friends would also have been left in the very uncomfortable position of personally collecting funds.

Grassroots groups that need to raise funds but don’t have the resources to become a registered charity can look into groups that can act as their fiscal sponsor. Sponsors will usually take a very small percentage of funds raised in order to cover the work hours of their staff members who collect and track the donations, but this is quite reasonable and much less expensive than becoming a registered charity. It also gives the group the peace of mind of knowing that all of the money will be handled properly and that donors can be confident about where the funds went as well as claim them on their taxes. Neighborhood associations are critically important to the civic health of Portland, and the Friends are very grateful for the steadfast support provided by both BWNA and CNN.

The Friends were very strict about only spending money when it was absolutely necessary. Every penny spent on flyers, posters, or our donation envelopes was a penny that wasn’t going toward new playground equipment, so it was important to be very strict about spending. The only money the group spent from donated funds went toward the donation envelopes, and this amount was covered many times over by the donations made by Friends members. Most of the effort that went into the envelopes could come from the time given by Friends members, from designing them to stapling them into the BWNA newsletters for distribution. The only thing that couldn’t be done by volunteers was to print the envelopes themselves, and the modest amount spent on the printing was well rewarded with community donations. As far as getting the word out in other ways, Friends members relied on social media, e-mail newsletters, and printing their own flyers at home to post at local businesses. These efforts had a high cost in time but a low financial cost to Friends volunteers.

Until it’s safe to meet in person, our monthly meetings are held on Zoom. We meet the second Wednesday of every month at 7:00 pm. To receive an invitation, e-mail Friends President Gary Hancock at outside503@aol.com.

Friends of Wilshire Park is a volunteer organization in Portland that is dedicated to making improvements to the play and sporting areas of Wilshire Park as well as enhancing the beauty of its natural spaces. You can reach us at friends@friendsofwilshirepark.org.